Skip to content Skip to navigation
See our Campus Ready site for the most up to date information about instruction.Campus ReadyCOVID Help
University Extension 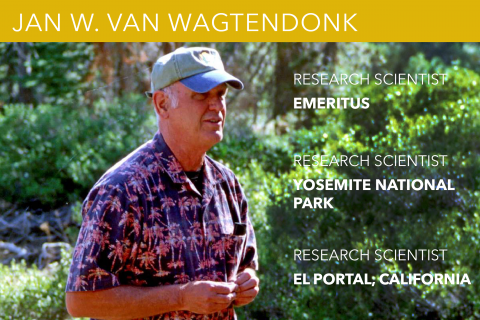 Dr. van Wagtendonk grew up in Indiana, where he began his study of forestry at Purdue University.

Summer seasonal work as a smokejumper for the Forest Service and the Bureau of Land Management convinced him to finish his undergraduate work at Oregon State University, where he received his B.S. in Forest Management in 1963.

After serving as an officer in the U.S. Army with the 101st Airborne Division and as an advisor to the Vietnamese army, he entered graduate school at the University of California, Berkeley.  There Dr. van Wagtendonk obtained his M.S. in Range Management in 1968 and his Ph.D. in Wildland Resource Science with a specialty in fire ecology in 1972.

His areas of research included prescriptions for burning in wildland ecosystems, recreational impacts in wilderness, the application of geographic information systems to resources management, and the role of fire in Sierra Nevada ecosystems. He continues those pursuits today.